Fundraisers are doing it themselves for lung cancer research! 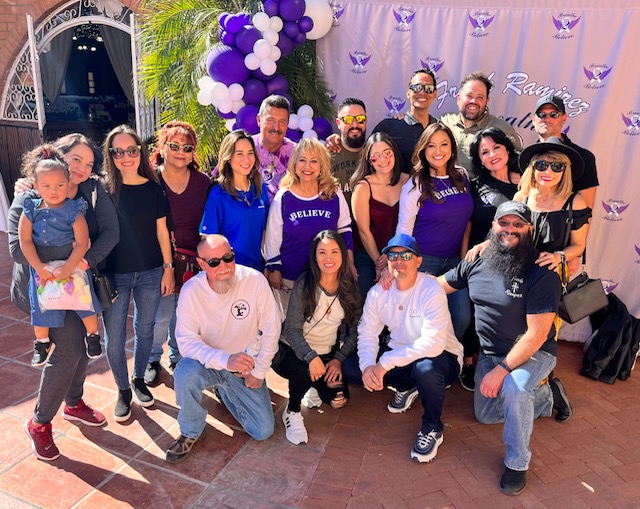 Any activity or event can be an opportunity to support lung cancer research – and these fundraisers are a great example! Read their stories below, and learn how you can get started on your own event.

PHOENIX, AZ – Vanessa Ramirez and family hosted a brunch event to raise awareness and funds for lung cancer research in memory of her father, Frank. The event was a huge success and they reached their goal of $30,000!

The event included vendors, a raffle, and other fun activities, as well as a chance to hear from cancer survivors. Diamondbacks baseball legend Luis Gonzalez led live auction which brought in over $2,000 of the total raised.

Vanessa and her family generously split the proceeds between LCRF and other local cancer fighting organizations in Phoenix.

RICHMOND, VA – Noah Holman, who attends the University of Richmond School of Law, raised $6,000 for lung cancer research by holding a golf tournament with the Richmond Spots & Entertainment Law Society in memory of his mother, Marilyn.

“Since her passing, I always remind myself that her legacy lives on through me and each of my siblings,” Noah said. “My mom lived her life by giving back to others, always putting others’ needs above her own. With that in mind, I couldn’t think of a much better way to honor her legacy than to host this event with the goal of helping other families affected by this devastating disease.”

HARMONY, PA – High school senior Alyson Rosell hosted a charity kickball tournament in memory of her grandfather, Lawrence Rossell, who died of lung cancer on May 15, 2013. The tournament, which raised $1,500 for research, included raffles and t-shirt sales.

“I was very young when he passed, and I didn’t really understand everything that was going on,” Alyson said. “All I knew was that he was sick, and he left too soon. He was my best friend, and it broke me down emotionally when I lost him. My grandfather influenced me to become a better person and I know he is still protecting me.”

“Families all over the world are going through the same pain I felt as a child,” she added. That’s why she chose to do a senior project “that will help research ways to fight the battle one step at a time.”

The tournament was such a huge hit among Alyson’s classmates that they are eager to do it again!

Danyelle Shapiro and Ashley Katzen began the event in 2014, in memory of parents they’d lost to cancer. Danyelle’s father passed away from lung cancer at age 41, and Ashley’s mother died of pancreatic cancer at age 54. .

The collaboration between the two women was sparked by the impact cancer has had on their lives and the grim statistics for each disease. Their personal message: “Awareness is hope, and hope never quits!”

IMPERIAL, CA – Jessica Salgado and her family planned a musical festival themed birthday party in memory of her mother, Gloria, whom they lost to lung cancer. “Glochella” was quite the event with live music, dancing, art installations and more. Together, the family raised almost $15,000 for lung cancer research!

This event was simple but special: family and friends coming together over their love of music and their love for Gloria.

“Joseph and the Amazing Technicolor Dreamcoat” by McMagical Productions

HADDON TOWNSHIP, NJ – McMagical Productions presented the musical “Joseph and the Amazing Technicolor Dreamcoat” at the Ritz Theatre in Haddon Township, with a percentage of proceeds donated to LCRF. McMagical Productions is a non-profit organization created in memory of and with inspiration from Barbara McKinsey, a young dance teacher who passed away from lung cancer in June 2013. The organization serves those suffering from chronic diseases by raising money, raising awareness, and raising their spirits through the performing arts.

Want to make a splash with your own fundraising event? We would love to help support and brainstorm with you – here are some ideas! Reach out for more information and questions to Emma at enestler@LCRF.org.