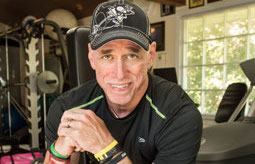 It wasn’t a hacking cough. It was more like a tickle … a need to clear my throat when talking. But what seemed so small and insignificant turned into a battle of a lifetime for me.

It was the summer of 2016 and I was only in my mid-fifties when I went for a chest x-ray. They found two liters of fluid in my left lung, and I was quickly diagnosed with stage IV lung cancer.

It was so advanced, it had spread to other areas, including my leg and hip bones.

Needless to say, I was shocked. As a personal trainer, I was fit and healthy. I didn’t smoke and I had no environmental factors that would increase my chances of lung cancer.

So it made sense that testing showed the cancer was genetic and I began treatment with a first line drug for genetic cancer. I also had two weeks of daily radiation on my left thigh to prevent the largest bone in my body from weakening.

I wish I could say it helped. But it didn’t…

By November, I was a shadow of my former self. I had no appetite or energy, and I lost 25 pounds. When training my clients, I had to lie down afterward to muster up enough energy to walk back to my car. My family feared I wouldn’t even make it to Christmas.

It was a scary time, especially when scans in November showed the cancer had spread further. Honestly, I could have lost my life if it weren’t for the advances made by research into lung cancer.

As my condition worsened, it turned out there was a new drug, only recently approved, which targeted my cancer’s specific gene mutation. There was a chance it could help me. I started it on December 5, 2016. The change was so dramatic, it was like a switch was flipped somewhere!

I kept training my clients at the gym, and soon I felt like I could do a little bit of exercise for myself. Shortly after that, I had enough strength to do a full workout. From there, my appetite and weight went back up, and so did my energy levels.

I also adopted a personal motto. Some days I felt beaten down, but I went to bed saying: “Tomorrow, I’m going to WIN The Day.” I knew I couldn’t just say it – I had to live it and believe it.

Today I’m healthy. My scans don’t light up with cancer anymore. And I embrace the platform I’ve been given. I help fundraise through LCRF’s walks. I also take any opportunity I can to remind people that they only need to have lungs to be able to get lung cancer. It doesn’t just happen to smokers.

The COVID-19 pandemic has been scary for everyone, but especially those who have had lung cancer. It’s more important than ever that we WIN The Day, so I’ve joined LCRF’s Facebook group for the Lung Cancer Community to connect with others affected by this disease –patients, caregivers, families, and friends. You can find me there: lcrf.org/facebook-community.

Every day I say a silent thank-you for the drug that gave me my life back. And the research behind it… because if I’d developed cancer even two years earlier, that drug wouldn’t have been available to me. I wouldn’t be here today.

So, I’m proud to support the Lung Cancer Research Foundation because they’re saving and extending lives by funding research for the prevention, diagnosis, treatment and cure of lung cancer.