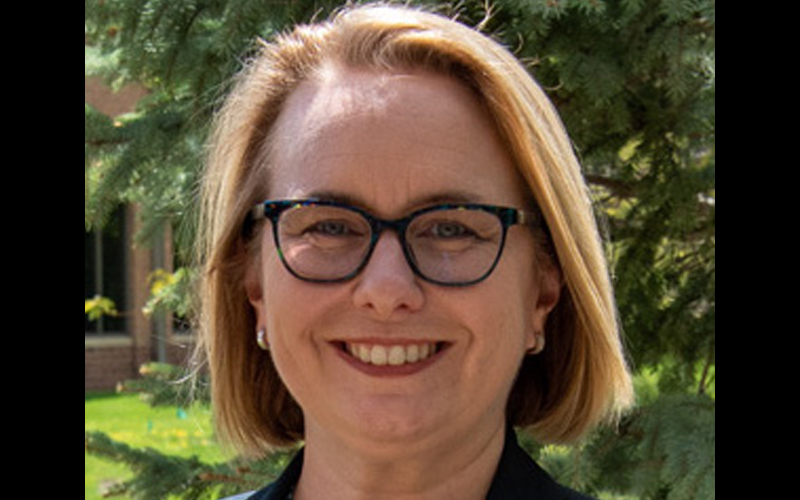 My name is Emily Bannister and I have lung cancer. I never thought in a million years that would be something that I would encounter, especially at my age – I was only 46 when I was diagnosed almost a year ago. I had just left my job in occupational medicine and was in the process of starting my own practice. My husband and I had a 6-year-old daughter and 4-year-old twins. Lung cancer was not part of the life I had pictured.

We have a really tough problem with air quality here in Minnesota in July. I didn’t really think anything of it when I had trouble breathing. But then, I started to have this really strange sort of whistling sound when I’d lie down. I was wheezing when I breathed in and out, but I heard it in my throat, not from my chest. I don’t have any history of asthma. I’m a doctor, and I had to look up wheezing while supine. The two things associated with that were GERD – acid reflux – and sleep apnea. I happen to have both, and those were my only chronic medical problems. Then on July 15, I noticed that my heart rate really went up when I went up and down the stairs while I was about to go to the Y. I got there and it turned out my trainer canceled. As I was sitting in the parking lot, I just said, no, something’s wrong. So I went to urgent care.

Of all things, that was the one day that my lung exam was abnormal – my wheezing was faint and I wasn’t coughing. They did a chest x-ray and said they thought I had right upper lobe pneumonia, which I’d had a few years earlier. I was given antibiotics but after a few days I didn’t see any response. I decided that I needed to go back because I didn’t think the antibiotics were working, and I knew other medication was available.

The doctor said, your lungs are clear, your labs are normal. I just want you to wait and see how it goes. I had a follow-up appointment two weeks later, and the standard of practice is to do another x-ray. If the x-ray was the same or worse, the doctor would order a CT scan of my lungs and refer me to pulmonary.

I was surprised when the x-ray was worse, because I was feeling somewhat better. Doctors kept telling me I didn’t look like my CT scan. My vitals, blood pressure, pulse oxygen levels – all normal. But the CT scan looked horrible. I had really enlarged lymph nodes and just all this scattered stuff all throughout my lungs. When I went to the pulmonologist the next day she told me she was confident I had sarcoidosis and ordered a bronchoscopy for the following Wednesday.

I managed to convince myself the doctors got it wrong and it was sarcoidosis. But the next day, my biopsy results came back, and adenocarcinoma of the lung was everywhere that they biopsied. That was the worst moment in my life. It was so hard. I called my best friend, and I said: help my husband raise my kids. Because I knew that it was bad, really bad. I know enough about medicine to know that lung cancer is horrible.

Although my lung cancer was stage 4, it was all contained within my chest cavity. My pulmonologist advocated for me to get biomarker testing, and that’s when I learned about EGFR and the other biomarkers that can drive cancer. Again – I went to medical school and had no idea. I never heard anybody talk about a gene mutation driver for young female non-smokers.

My own support group

How I cope as a doctor is to learn everything I can – get out of my emotional state and just be reasonable, compartmentalize it. I learned that EGFR was the most common mutation with about 15% of patients with adenocarcinoma having it. No other driver mutations were present, and while I was waiting for the rest of my results I started talking online with a group of woman doctors with cancer. I started my own support group of friends on Facebook. My tumor came back positive for EGFR Exon 19, a best case scenario in this worst case scenario of having lung cancer.

I was over the moon, and that was the biggest boost. A few days later, I found out a clinical trial was available for me. I said, yes – anything that gives me a better chance of survival.  I saw a lung cancer specialist on August 24, and the next day was my 47th birthday. My mom assured me it wasn’t going to be my last. I was entering the trial September 1, and that’s the best birthday present I could have had.

On August 30, my breathing was interfering with my sleep, and my watch showed my pulse oxygen was abnormal – like 89%. At 5 AM I walked into the ER and said, “I’m newly diagnosed with lung cancer, and I’m short of breath.” That gets you in the back pretty fast! A CT scan showed I was way worse than I had been just five days earlier, and they were talking about admitting me. But my amazing pulmonologist moved heaven and earth so I could start treatment a day ahead of schedule.

Within about a week, I was off oxygen. I could lie on my right side again. I cried when that happened – I could breathe. The tumor was shrinking. I take adult tap dance classes, and was able to do the first class of the season on September 14. I couldn’t believe I was dancing. It was amazing. In a beautiful show of support, the owner of the dance studio did a t-shirt fundraiser which raised enough for a year of classes for me and my girls, plus over $400 to donate to a cause. I chose LCRF because I know that money is going directly to research.

At my two-month follow up, my doctor said I had the best response to treatment that she’d ever seen. I could tell the difference – any lay person could have looked at the two pictures and seen it. Everything in the lymphatic spread was gone; the cancer was just destroyed.

After a month of cancer treatment, I was able to go back to planning my solo practice and fulfill that dream. A few visits later, I was told they wouldn’t even pursue an evaluation for lung cancer based on my current scans. That’s how much better my lungs were.

Regardless of what comes out of my clinical trial, it seems to be helping me. I want to contribute to research like that for the future. We need more funding for lung cancer research so more people won’t have to have chemo, won’t have to have radiation, and won’t feel like they have a death sentence. When I started this journey, I thought I was going to die within a year. Now I’m hearing about progression free survival. I know it’s not forever because at some point I’ll develop resistance. But my goal is to take the next pill available, and then the next.

I’m part of EGFR Resisters, and I’m proud of their partnership with LCRF to fund EGFR research. I was really excited to see we beat our fundraising goal and will be able to fund two researchers instead of one.

We definitely need to be raising more money for those who aren’t in the best case scenario. Not everybody responds to treatment, and not everyone has the options. I found out that I could write a donation to the Lung Cancer Foundation in my will, and I said yes – I’m going to donate because I have to fund the research for the future. When I do die – which I hope is in my 90s – I want that money to fund research, so that someone else who isn’t expecting lung cancer can benefit from treatment and live a long and full life.