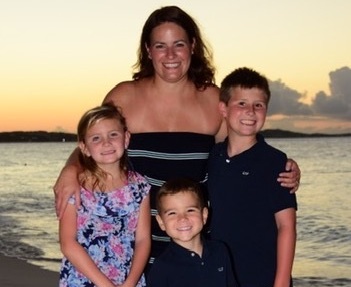 Jen is someone most people would describe as a supermom: active and on the go with three children ages 4-10. That’s why she was surprised when she couldn’t shake the post-nasal cough she developed over the summer of 2017. “I hadn’t been feeling great and thought allergies were the problem. I almost never get sick, though,” she recalled. “I took a full course of antibiotics and somehow felt worse afterwards. They took a chest x-ray and the results showed some abnormalities.” Things escalated quickly from there.

Jen was admitted to the hospital after her neck became so swollen that she had difficulty breathing. Eight days later, the doctor broke the news that Jen had a mass in her lungs—one that was indicative of lung cancer. “What do you mean, I have lung cancer? This is crazy!” Jen recalled thinking after hearing she was facing stage IV non-small cell lung cancer at the age of 38.

Many people don’t think of lung cancer as a women’s issue. What they don’t realize is that lung cancer claims the lives of more women than breast, ovarian, and cervical cancers combined.

Fortunately for Jen, her healthcare team performed biomarker testing on her tumor, which tested positive for the cancer-causing ALK genetic mutation. This insight opened up Jen’s options for treatment. “They put me on alectinib (Alecensa®), which helps treat ALK positive lung cancer tumors. It helped shrink and then stabilize the growth of my tumor,” she explained. “After just four days of being on alectinib, I felt great and I haven’t looked back since.” Jen has fondly nicknamed alectinib her “miracle drug.”

And Jen’s zest for life never wavered. She searched the internet for ways to connect with other ALK positive lung cancer patients and advocate for more research behind life-saving lung cancer treatment options. Jen joined two patient advocacy groups, ALK+ and ALK Fusion. “We figured, let’s take matters into our own hands,” Jen recalled discussing in her group meetings. “I want doctors to understand the patient experience more, and there’s so much positivity that can arise from collaborating with them.” Today, Jen takes a stand for better lung cancer treatment by fundraising—she helped organize and fundraise almost $700,000 so far—and by sharing her story at conferences and community events.

“At the end of the day we are people, and we all want the same thing. We need more treatment options so we do not have to constantly face this idea of the ‘end of the road.’ I’m just trying to save my life, and my life is in the hands of science.”

“I need medicine, here and now. I will do anything to stay here with my children. This is my reason.”

Jen channels her energy into reading up on the latest lung cancer research and traveling to speak with oncologists, researchers and community members to emphasize the urgency of being able to live beyond a lung cancer diagnosis.
“Every day is a new day and a new chance,” she explained.