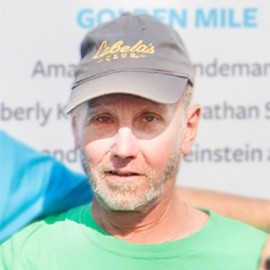 At 49 years old, Joe was a proud father of three – two girls aged 12 and 10, and 6-year-old Michael. Joe is the kind of dad who, when he found out about Michael’s hernia, decided to have a non-painful lump in his own groin checked out. He volunteered to have the procedure first, “to show him it would be okay.”

To everyone’s surprise, pre-surgical testing revealed a mass in the lower right lobe of Joe’s lung. A routine procedure suddenly turned into something more urgent. “Off we go with my scans to MSK,” Joe remembered. “The nurse does the intake and tells me the doctor will be right in. Then I look and see Doogie Howser standing there – the doctor was so young! He was incredibly supportive and went right to doing a whole bunch of tests. I thought, ‘This is the place for me.’”

He went into surgery expecting that it would be the only treatment he’d need. “I went under at 6 PM. I woke up in the recovery room and looked up at the clock. It was 7:30. I hoped it was morning, because otherwise he hadn’t done the surgery.” Joe’s lung cancer had spread to the lymph nodes, and he was going to need much more extensive treatment.

Joe brought his wife and her sister – a nurse – to the oncologist, armed with a list of questions. “I had a friend who had been diagnosed with lymphoma and had been given a 98% survival rate,” he explained. “So in my head, I thought maybe my chances were 50/50. I asked the doctor the success rate for my Stage 3B cancer, and he said 17%. I figured he heard me wrong and thought I had asked him the failure rate, but no – he was telling me that I had a 17% chance of being alive in five years.”

“I like to have the best case and worst case scenario, so I asked what would happen if I did nothing. He said I’d likely be dead in five or six months.”

Joe was determined to do what he could to stay alive for his family. His wife was instrumental in his treatment, setting up his appointments and tracking his medication. His sister-in-law lent her support, and his friends made sure he got out of the house.

Joe had two rounds of chemo and one round of radiation, going to work every day other than treatment days. “I wanted to show the kids things were OK.” Despite the sense of stability, they knew Joe had a serious condition. At Christmas, his son wrote a letter to Santa.

It broke Joe’s heart, but the answer – which came from a stranger answering letters from children on behalf of Santa – was astonishing.

Joe carries a copy of that letter with him.

About two years into Joe’s lung cancer journey, he felt a pain in his right leg and collapsed in the kitchen. His sister-in-law urged him to see a doctor immediately in case it had been a stroke. The cancer had metastasized to Joe’s brain. He had a tumor in the left lobe and two smaller ones on the right – he now had Stage 4 lung cancer. After diagnosis, he had whole brain radiation and then brain surgery. He continued with annual MRIs with a neurologist and CT scans with his oncologist.

A few months ago, Joe’s neurologist said something remarkable during a routine exam: “I think you’re cured.” Annual MRIs are now optional. His oncologist continues to monitor him, but Joe says he feels great except for ongoing balance issues from the brain radiation.

What may be most remarkable of all is that 15 years have passed since Joe’s initial diagnosis. Michael is now 21 years old, and Joe is 64.

In 2005, the year after Joe found out he had lung cancer, he signed up for the inaugural Strides for Life. The family of his friend with lymphoma has a summer house in the Hamptons, and they gathered there after the walk. “I’ve done it every year since then,” he said. “The most difficult was right after the whole brain radiation. Normally I’d run a little and walk a little, but I was very unsteady. I said, ‘If I have to crawl across the finish line, I will.’ I had one friend on each side, and I finished dead last with the cop car behind me.” The Buckheit Brigade is growing and going strong!

How has Joe maintained hope over the past 15 years? “I’m not a guy who is outwardly emotional,” he said. “There are times when I would look at myself and say, ‘You think you’re so freaking tough, prove it.’ I know people ask, ‘Why did I get this?’ My question is, ‘Why didn’t I die?’”

Joe looks forward to the day when luck is no longer a factor, and noted how lung cancer research has transformed the way the disease is diagnosed and treated. The tests that would have revealed a treatable mutation in his lung cancer didn’t exist in 2004. Patients today have more options than ever. “If you’re newly diagnosed, trust your doctors. They know things that they never knew before,” he observed. “Try not to miss any treatments in order to give yourself the best chance to succeed.”