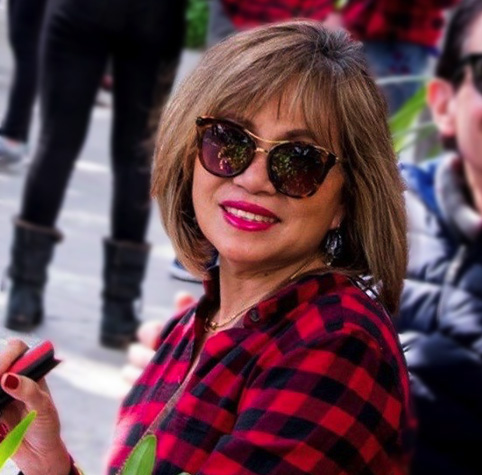 I always considered myself healthy. I used to have asthma, but I considered it a non-issue since it is under control – I haven’t had asthma attacks or symptoms in years.

In the summer of 2018, my husband and I went on vacation, and when we returned I noticed I developed a terrible cough. It wouldn’t stop for three weeks straight, and I even noticed a little tinge of blood came out when I coughed. It really concerned me.

Not too long after, I hosted some family members at my house. My brother-in-law is a doctor and my daughter is a nurse. When I told them how I have been feeling, they both were very concerned and made me promise to visit my doctor for a checkup. I made an appointment with my primary care provider, who ordered a chest X-ray.

The X-ray revealed a tumor on my right lung. I turned to my brother-in-law for advice, and he recommended that I have a bronchoscopy and other testing to get an understanding of what this tumor was. After several tests, I found out the tumor had spread to the upper, mid, and lower lobe of my right lung; and I also had a few small nodules. When I was diagnosed with Stage 4 metastatic lung cancer in August 2018, it was completely overwhelming and I felt so lost.

The oncologist sent the tissue for biomarker testing, and it turned out that I have the EGFR mutation. I am so grateful for biomarker testing because it helped open up more treatment options that have turned out to be right for me. My oncologist decided the best treatment for my case was a targeted therapy – Tagrisso – to treat patients with the EGFR mutation.

To be honest, I wasn’t sure how to feel about undergoing further lung cancer treatment after my surgery. I really had to think about what that meant for me. So what I did was looked online – I read so many articles and informational materials on what to expect. After educating myself about Tagrisso and other lung cancer treatment options, I felt confident that I was doing the right thing for my health. I also had my faith to keep me strong throughout my journey. I’ve been on Tagrisso since October 2018.

My first CT scan after beginning treatment was in December 2018. The scan showed that my remaining nodules had shrunk in half! Since then, I haven’t experienced any major side effects or even symptoms of lung cancer since my very first difficult cough, right before I got diagnosed. I have my fifth scan coming up in August, and I have nothing but great expectations that it will go well!

I found LCRF through the #TogetherSeparately Facebook group, and I’ve enjoyed being part of this wonderful community where I can connect with other lung cancer patients and survivors. It is my new mission to share my story with others who are on the same journey. I know how overwhelming it can be to have lung cancer, but I urge every new patient to keep talking to your doctor and learn as much as you can about treatment options.

I also advocate for earlier screening and detection of lung cancer, and I’m happy to see the new recommendations for expanding the population who should be screened. I have joined a patient advocacy group called the EGFR Resistors. I hope my story is helpful to those who are reading it, and I am happy to chat with any patients. Please join the Facebook group at facebook.com/groups/lungcancercommunity and say hello!