Despite the significant clinical benefit of epidermal growth factor receptor (EGFR, a receptor tyrosine kinase) inhibitors, primary and acquired resistance are commonly seen in lung cancer patients with EGFR activating mutations. Among those patients, ~20% tumors progress upon treatments by unknown mechanisms. By analyzing the genome sequencing data of the lung cancer patients with acquired resistance to EGFR inhibitors, Dr. Yao and his colleagues at MSKCC identified ARAF amplification as a new genetic event that may be responsible for the drug resistance. They observed that ARAF could activate RAS, a major effector of EGFR, through disrupting the binding of NF1 (a negative regulator of RAS) to it. Thus, the elevation of ARAF protein in cells could promote the RTK-mediated RAS activation and the downstream pathways that are required for cell proliferation or differentiation. Current data suggest, in EGFR mutant lung tumors, ARAF amplification likely causes the drug resistance by activating RAS signaling. Dr. Yao seeks to explore the detail functional consequences of ARAF activation of RAS in lung cancers and determine its role in the regulation of drug sensitivity. In addition, patient-derived xenograft models will be used to investigate therapeutic strategies for treating the ARAF-dependent drug resistance. 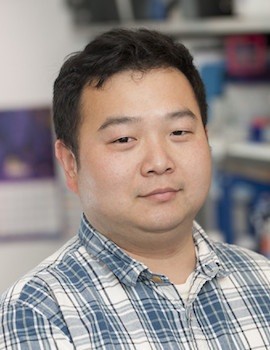