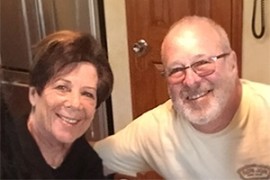 My story started in April 2013 with a very bad cough. I was reluctant to see a doctor because that was my only symptom. The cough persisted long enough for my husband Marty to convince me to make an appointment with our primary care physician.

The doctor gave me a prescription for cough medicine with codeine and sent me for a chest X-ray, which showed I had pneumonia. He told me to continue taking the cough medicine, get plenty of rest, and come back for a follow-up visit in a week.

Now I was getting scared. We interviewed three surgeons and chose the one my doctor had recommended. My whole family and a few close friends gathered in the waiting room on May 26, a date I will always remember. The news was not what we hoped to hear: I had stage IV metastatic non small cell adenocarcinoma. That day ended with many tears, much fear and unhappiness. I was in shock – I was not supposed to have something like this happen to me.

Next came the research and a series of decisions. Where did I want to be treated, and by which doctor? Our first stop was the same hospital where I had my biopsy. We met with a thoracic oncologist whom my primary care physician had recommended. Her first words to me were, “Do you always get dressed up to go to the doctor? ” I thought that was rather rude, but even more harsh was hearing her prognosis that I had six months to two years to live. I didn’t like her much, and we never saw her again.

Second stop was at Hackensack, where we met with a doctor who was treating someone we knew for lung cancer. The facility was brand new, and the doctor was a very kind and compassionate man – informative and caring. I liked him very much. Before we left the hospital, I asked if I could see the chemo suite. They led me to a large open room filled with lounge chairs where people were sitting around with IVs in their arms. I left there in tears. I could not see myself sitting in that room without any privacy.

They say the third time is a charm, and in our case, it was. Our next appointment was with Dr. Mark Kris at Memorial Sloan Kettering. After meeting him, talking to him, and being examined by him, I was feeling hopeful for the first time since my diagnosis. I knew this was the place I wanted to receive my treatments and he was the doctor I wanted to treat me. He intended to use the same two drugs for my chemo as the other two doctors but he was adding a third one to the mix. I chose him not for his treatment plan, but because I liked his demeanor, confidence and his way of putting things. He said it was his intention to take a horrible diagnosis and turn it into a chronic illness. Then he said he measured success in years. I knew I could trust him, literally, with my life.

The other person who saved my life in a different sense was and continues to be my amazing husband. I could never have made this journey without him by my side. Marty has been there every step of the way, for every doctor appointment, every treatment and even every phone call. He is caring, supportive, intelligent and patient, and I can’t imagine a better advocate in the world. He can deal with insurance companies without losing his temper, which is not an easy thing to do. Sometimes he refers to their paperwork policies as “formal abuse.” Every time I have a scan, he has to debate them. For instance, their doctor – someone I’ve never seen – thinks I should have a scan with contrast, while my own oncologist disagrees. Marty stands up for me, stays positive, loving and caring, and helps me in any way he can.

No mistake – this is a challenging journey. First it was the shock of hearing the diagnosis, the dreaded word “cancer.” Next came dealing with the first question everyone with lung cancer is asked: “Did you smoke?” The suggestion that it’s your fault for getting this disease really hurts. The early morning wake-ups to get to New York for eight-hour treatments were definitely unpleasant, as were the following three days after each session curled up in a ball binge-watching some TV series we had never seen. Also alarming were the times I woke up to blood on my pillow and didn’t know where it came from. I got used to the nosebleeds and bleeding gums, but when I started bleeding from my eye I was concerned. And of course, both the disease and treatment can make you fatigued.

My initial treatment included three drugs in the infusion: cisplatin, bevacizumab and pemetrexed. Dr. Kris was hoping for six treatments with the cisplatin, but we only got to four because it started having a negative effect on my kidneys. I was nervous about giving up a drug that was working so well. From July 2013 – April 2014, my tumors continued to shrink. My last treatment was May 3, 2016 – my blood pressure was getting too high. While I have gone a year without treatment, my latest scan showed no sign of active disease.

Big changes, and my dream team

After my diagnosis, I made a lot of changes in my life and eliminated as much negativity as I could. I even saw that cancer offered me a gift – I learned how to live in the present moment. I read Bernie Siegel’s books, and his writings gave me the courage to ask Dr. Kris for a hug. I later had the opportunity to meet Dr. Siegel and share my experience with him. I began reading affirmations every morning and subscribed to a daily messages including Lessons Learned in Life and Ralph Marston’s The Daily Motivator.

My children have been by my side for every decision-making appointment. My friends and acquaintances are supportive with their prayers and positive thoughts. When they tell me what an inspiration I am, I feel my inner strength growing.

I met one of my friends after I discovered yoga: my amazing teacher, Heather Bivona. Heather is a ray of sunshine who teaches me at my home 4 or 5 times a week. She has been incredibly supportive, believes in me, and always sees the positive in all situations. We focus on my breathing and any other area that needs attention. Heather is definitely a member of my dream team of supporters.

Also on my dream team is Amy Arvary, a hypnotherapist and one of the most positive people I have ever met. Amy helped me learn to relax and meditate, to focus on what I wanted, and to manifest my healthy self. She taped our sessions so I can listen to them whenever I need to hear her voice guiding me through the chaos or scary voices in my head. She is loving, supportive and fun. Having her in my life helps me believe in myself and gives me the courage to fight even when I am exhausted.

Last, but definitely not least, is my dearest friend Marcia. We have been friends since high school, attended each other’s weddings and try to see each other whenever we can. She has been there for me every step of the way, with daily phone calls and near-weekly lunches. She always talks me through scan anxiety – my nerves pre-scan and then my fear waiting for the results. On the days I was curled up in a ball on the couch, she would spend hours on the phone with me. I know if I ever needed anything, she would be here in the drop of a hat. We live about an hour apart and we used to take turns driving to see each other to meet for lunch. While I was undergoing treatment, she was always there. If I could pick my sister it would be her. She is my forever friend.

My friends and family have supported me in the Northern New Jersey Free to Breathe (now merged with the Lung Cancer Research Foundation) event at Horseshoe Lake in Succasunna, NJ. Heather, my yoga teacher, has walked by my side as part of my team. She listened to my breathing as we walked, talking me though the times I felt short of breath. She encouraged me so I could finish ahead of my team and thank them at the finish line.

Our team came in 2nd place for fundraising the first year. One of my granddaughters was so touched by the event that she decided to raise money for this wonderful organization as her “Mitzvah” project for her Bat Mitzvah in September 2016. In our second year, we were the top fundraising team.

In 2017, we were asked to be the honorary chairs for the event. We are determined to double the money we raised last year and are going to try soliciting local businesses and large pharmaceutical companies. I became involved because I want to raise as many funds as I can for lung cancer research. The many advances in lung cancer treatment has helped me remain hopeful. People are living longer with this disease, and yes – I am hoping they find a cure in my lifetime. If I don’t see a cure, then I’m glad I can help work toward a future cure for others.