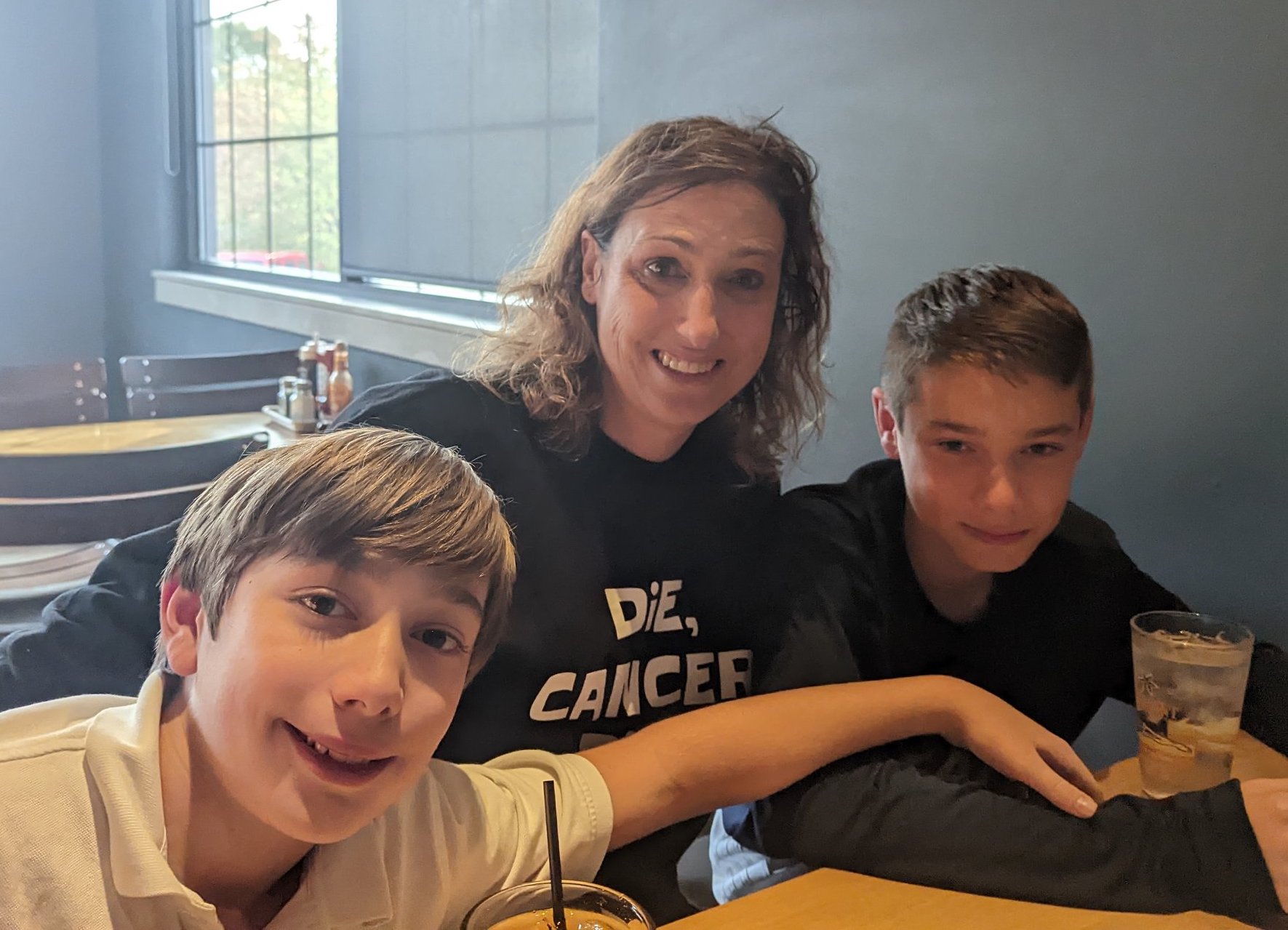 Laura Greco is facing a nemesis that has threatened her numerous times. And she has made her beef public, emblazoning her bold intention towards her enemy right across her chest.

Laura has lung cancer. On September 23, 2022, she put on the outfit she has worn for every first day of treatment since 2018: a simple black t-shirt with the words, “Die, Cancer, Die!” across the front. Then she began her third assault on a brain tumor that has refused to go away.

“It seems like the third time is the charm for me,” Laura noted. “This is my second brain radiation therapy on this tumor. And, I’ve had a brain surgery to try to remove it. I’ve nearly died twice, saved by my husband both times. And, I keep fighting. I’m still here.”

To mark that first of six rounds of radiation, she posted a photo of herself on Twitter with the caption “Really pumped up to kill my cancer today. Die Cancer, Die!” To Laura’s surprise, the tweet took off – 30,000 likes, more than 800,000 views, and shared nearly 1,000 times within a few short days. She saw an opportunity to raise awareness that anyone with lungs can get lung cancer, and, maybe, raise a few dollars for research in the process.

As a seven-year lung cancer survivor under the age of 50 with no risk factors for the disease, Laura knows how important it is to spread the word that anyone with lungs can get lung cancer. The mom, wife, and lawyer from Saratoga Springs, NY, has become a full-time advocate for lung cancer awareness and funding for research.

“Among the many things I have learned over the last seven years: we deserve better, and we should get better – better attention, better treatment, better survival, and it is only with more research that we will get there. The cure is out there, and we just have to fight for it. It is up to us to advocate for ourselves, to fight for recognition at all levels of government, all levels of society. People need to know that they don’t need to be ashamed of their diagnosis and they matter.”

By raising her voice and sharing her fight, she has given lung cancer survival a national platform – all while under treatment. “I wanted to focus on living and do more advocacy. God put me on this earth to be the beacon for other people with this disease and show them that we can survive it.”

Determined to come out on top

Laura is determined to defeat her tumor. She simply will not allow it to defeat her. “I have lost many friends, and they say it just takes one tumor to kill you. I will not allow that to happen. This is the time that I am going to kill it before it kills me.”

Her journey to this point has been harrowing at best. The mass in her lung led to an initial diagnosis in 2015 of Stage 3A non-small cell adenocarcinoma lung cancer, driven by a translocation within the ALK gene. At that time, the targeted therapy, alectinib, was not yet approved by the FDA for first-line treatment. She was prescribed two rounds of chemo concurrent with six weeks of radiation, followed by surgery to remove the mass in her left lower lung.

“The results weren’t great. I was 40 and had young kids. I kept asking, what can you do for me. I have young kids. I refuse to die. The answer was to do four more rounds of chemo to ‘mop up’ any remaining cells. So, I did.”

Laura did four rounds of chemo and went back to her law practice. The next year had its ups and downs. Laura began having headaches, so she convinced her general practitioner to get her a head and neck MRI – that showed more than 10 tumors in her brain. She was able to start on alectinib days after it received breakthrough designation from the FDA but eventually experienced liver toxicity from the treatment. Going off it only caused the brain tumors to grow back and increase in number. She started back on alectinib and eventually increased to a 150% dosage, but one or two of the tumors continued growing.

In the summer of 2018, Laura had her first round of brain radiation.

“I started to feel worse, but I continued to live my life. I was traveling and fitting in brain mapping and the radiation treatment between trips. Things really went sideways in 2019.”

Unbearable head pain highlighted a new reality. The cancer in Laura’s brain was causing swelling and edema. At the recommendation of her medical team, she waited for the situation to improve on its own. It didn’t. Ultimately, Laura had an emergency brain surgery in early November of 2019, which led to two further surgeries.

“I remained on the two-drug combo, but in the fall of 2020, it started to show signs that it was no longer working fully. They wanted to do an ALK drug plus chemo. I refused. Chemo doesn’t do much for the brain and it really reduces my quality of life. We agreed to radiating the four growing tumors along with the two-drug combo. It worked for a little over a year.”

In early 2022, Laura was scheduled for surgery because the tumor on the left side of her brain had grown. As a “Hail Mary” move, her alectinib dose was increased to 150% for 10 days ahead of the procedure. She was in pre-op when the surgeon announced that she didn’t need surgery that day; her scans showed significant reduction in the tumor that was scheduled for operation. She went home and went sledding with her kids to celebrate. Unfortunately, she had a seizure in April, after which she was scheduled to have some of her tumors surgically removed.

“It turned out that one of the tumors had the ALK mutation. That was completely resected. The other had a completely different genetic makeup. It was MET and EGFR amplified and was so intertwined with my motor function that to remove it would cause me to possibly lose the use of my hand. So, they didn’t get all of it. My ALK tumor was resistant to alectinib at this point, so the next drug to take would have to be loratinib. So, I suggested we test loratinib with capmatinib.”

Laura experienced a severe toxic reaction to loratinib – she lost her ability to speak coherently and to read. “It was the worst time of my life,” she said. It took 15 days for the drug to clear her system. She has lingering effects to this day. “With several dose reductions and hard work with a speech therapist, I have experienced significant improvement.” Laura was stable until about a month ago, when she had another seizure. Another scan showed more edema and growth in the MET-EGFR tumor.

“This is why I am getting radiation now – and that tumor has got to die.”

Laura is determined to beat her tumor, while continuing to advocate for more research funding, and living her life.

“Cancer is a thief, and we need to not let it be. We need to grasp the joy of living and realize how it can free us, too. By choosing to have this attitude, by knowing that the side effects can be managed, I can live with that. I am choosing to fight, and I will win.”